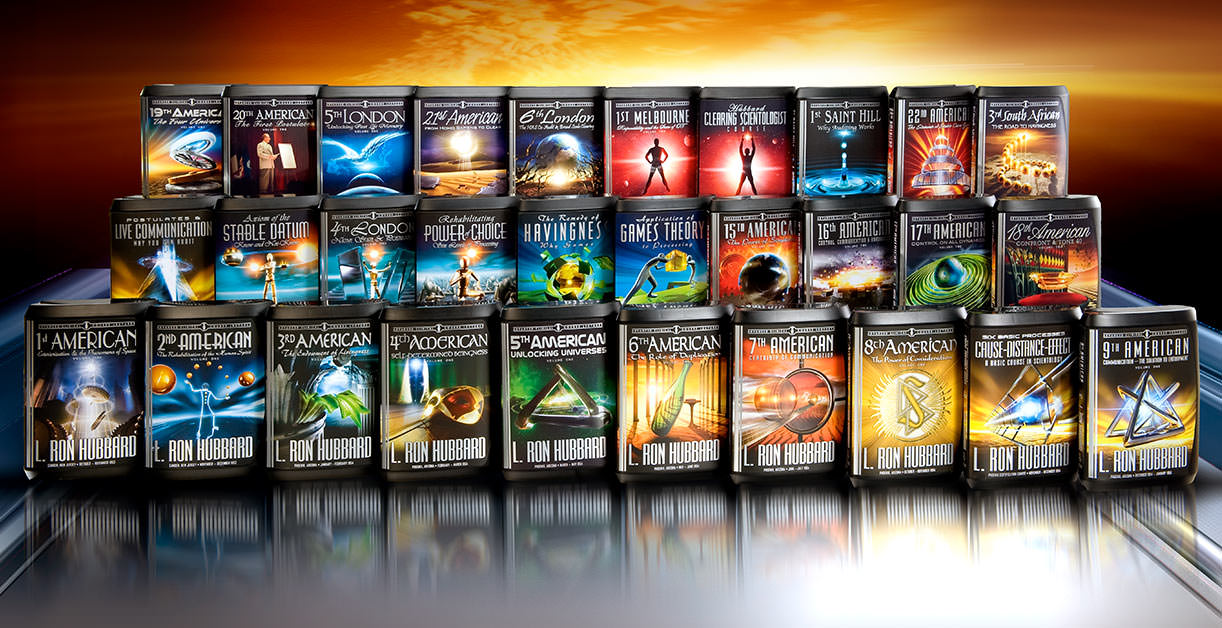 The Advanced Clinical Courses form the day-by-day record of L. Ron Hubbard's developmental research track, providing the whys, wherefores and wherehows of every discovery and milestone advance—and its application in full. Comprised of more than 1,000 lectures and 500 issues, this is truly the moment-by-moment path that leads straight to the Grade Chart we have today.

With the completion of the Philadelphia Doctorate Course, Scientology 8-8008 and The Factors, L. Ron Hubbard had discovered the potentials of Operating Thetan and the route to its accomplishment. But no matter the heights he had now achieved, his next step of research and development would prove even more momentous. That is, the refinement and simplification of procedures and processes until they could be applied by any auditor to the attainment of those potentials by every being.

To that end, he set up eight offices on the second and third floors of 726 Cooper Street in Camden, New Jersey. Those offices were dedicated to what was initially called a Special Course in Advanced Technique. In fact, it was a course so special that out of a deluge of applicants, only the twelve best auditors from across the planet were chosen to attend﻿— literally handpicked by Mr. Hubbard himself.

And so it was on that historic day, in October 1953, he delivered the opening lecture of the very first Advanced Clinical Course. Over the next six weeks, he instructed auditors in his watershed discoveries on exteriorization and its relation to rehabilitating beings to native state. Detailing its exact theory and mechanics, as well as its application, L. Ron Hubbard made it clear that exteriorization is not a process, but a natural condition being restored to every preclear.

But there was more and it, too, would become a hallmark of Advanced Clinical Courses. Mr. Hubbard opened an auditing clinic right on the premises and throughout the ACC—and under his direct supervision—students audited preclears ranging from new public with no previous knowledge of Scientology, to the most “impossible” of cases. The purpose: to provide him with a testing ground to research and further refine not only auditing techniques and processes, but the training of auditors. And so it was, in just this way, that he was to discover the means to plumb and resolve the greatest depths of human aberration and in such a manner that the technology could be broadly applied to the benefit of everyone.

Therein also lay the story of what would unfold over the next year. For notwithstanding the fact the Advanced Clinical Course was already in progress (and also notwithstanding his insistence that he would only train a select few), auditors world over were no longer just “applying” to enroll—they were demanding it. Just how L. Ron Hubbard responded is now the stuff of legend: No less than eight different Advanced Clinical Courses over the ensuing 12 months, comprising more than 500 lectures, which would culminate in the route to exterior OT ability as given in The Creation of Human Ability.

Yet his work was not done. For while he had codified the route that was Scientology, he still had to find the means by which any preclear could follow it. As Mr. Hubbard later wrote:

“In seeking full application to others and attainment for them of their potentials, it was necessary to codify the materials and develop processes for them.”

And therein lay the thrust of L. Ron Hubbard’s research and development through all subsequent ACCs. From Phoenix to Washington, DC, from London to Saint Hill, from Melbourne to Johannesburg—each ACC following the pattern of the first, as he worked with auditor after auditor and preclear after preclear. In that regard, Ron’s ACC lectures represent no less than the day-by-day, moment-by-moment racing pulse of discovery. For while each new milestone was announced to the broad Scientology field at a Congress, what followed in subsequent ACCs were all the wherefores and wherehows for application:

In full, here is the momentous chronology of research and development, never before available. Every lecture, every issue, every process. Here is also the accomplishment of the long-hoped-for goal of total knowledge. Not only for the fact one gets it all, but also for the fact that because it’s everything—in sequence as it occurred—the ease of study and duplication has no parallel. With no omissions, one gets it all.

As L. Ron Hubbard himself stated:

“These tapes provide the only existing running day-to-day, week-to-week record of the progress of research in Dianetics and Scientology. They were blazing a trail from total ignorance of the subject to today. Man knew nothing about the mind when it began and we are where we are today. And these tapes were the milestones on the road out.”

And that is why it was always Mr. Hubbard’s dream that one day the resources and technology would exist to make these lectures available to all. That day has arrived. And for the first time, they can all be yours.